I'm enjoying x2 v4. It's very similar to the years-old x2 I was using, and the Win 10 compatibility was worth the upgrade.

A couple of questions please?:
Thanks!

by nikos
does your DEL key work in other programs?

Thanks! BTW, that screenshot you pointed me to: 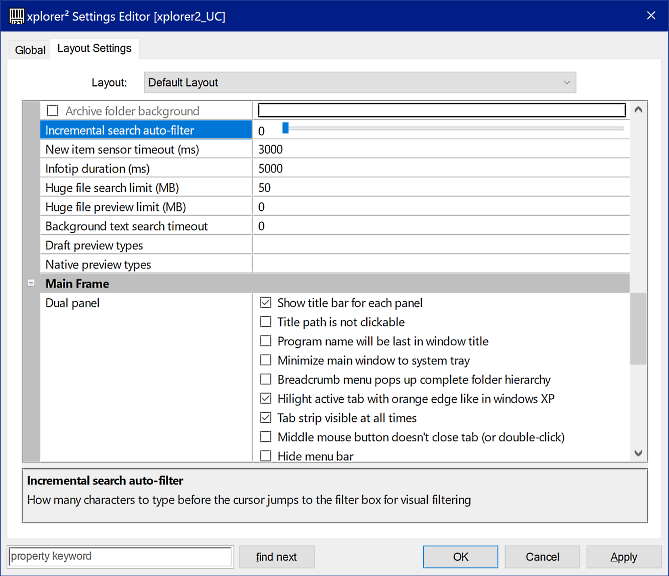 by AndyFielding
Does x2 have some kind of debug mode, or event log, where we can see what happens when I press Delete?

And meanwhile, among x2's many features, is there a way I can manually set my Delete key to delete the current selection?

My other idea was to create a macro that deleted the current selection, and assign it to the Delete key. I clicked Customize > Macros > Record, recorded a macro deleting a file, then clicked Finish. This appeared: 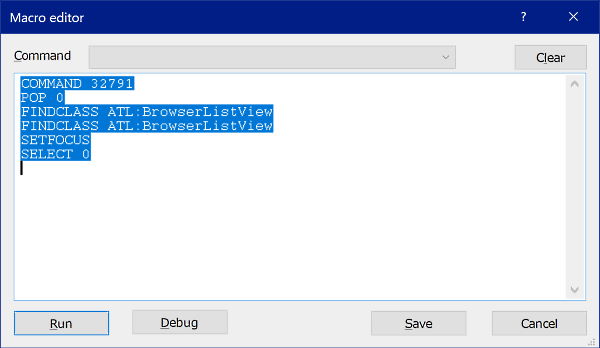 I clicked Save, entered a name for the macro (delete_selection), then clicked Save again—but x2 just asked me to name it again (?).

So I closed the Macro Editor window (I didn't want to click Cancel, right?), assuming my macro would then be saved. But when I clicked Customize > Macros > Edit Macro, this appeared: 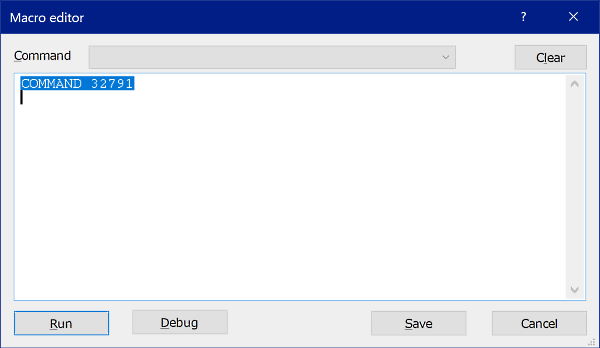 Did that mean that x2 replaced my macro's commands with a single numerical command? But why didn't it show my macro's name, so that would be clear?

I opened the Customize > Macro menu again, and clicked Organize, thinking I could see a list of available macros—and this appeared: 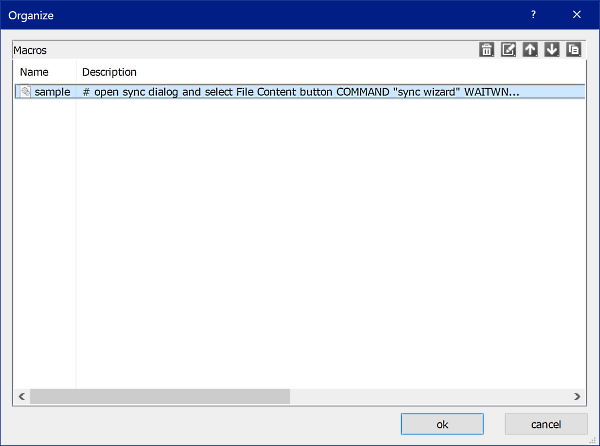 My macro wasn't listed—so it wasn't saved? Even though I clicked "Save" (twice)? How are you supposed to save it?

Meanwhile, until I solved that mystery, I thought I'd see if I could assign the Delete key to any macro. I right-clicked the "sample" macro, clicked Properties, and this appeared: 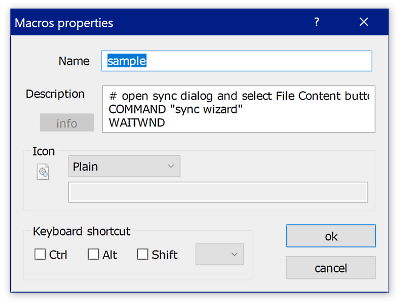 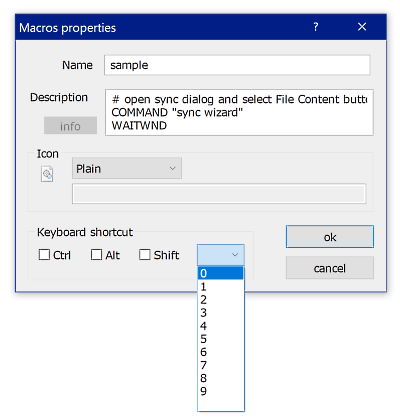 So even if I could record and save a macro to delete the current selection, I couldn't use the Delete key to run it, right?

I'm out of ideas then.

Apps have had macros for a long time, and developers have figured out simple, intuitive ways to do them. It's not necessary to "reinvent the wheel".

For example, here's how macros work in Notepad++, the text editor I use:

You record a macro (Macro > Start Recording), then stop recording (Macro > Stop Recording). You can now run it right away with Macro > Playback (shortcut: Ctrl+Shift+P). You don't have to name it, give it a shortcut, or even save it. I find this very convenient, as I often create macros for immediate, temporary use.

To save your macro, you click Macro > Save Current Recorded Macro. A simple dialog box appears where you enter a name and choose a keyboard shortcut, then click OK. Your macro now appears on the Macro menu (with its shortcut).

To modify or delete the macro, you click Macro > Modify Shortcut / Delete Macro. (A simpler name would be "Manage Macros".) In the list that appears, you can select a macro and:

• Change its name, shortcut or functions

• Set it to run once, a specific number of times, or to the end of the file

You can learn NP++'s actual macro language, if you wish. But to use these basic functions, I don't think anyone needs to read documentation, or resort to trial and error. It just makes sense.

by nikos
DEL key is kind of weird in xplorer2 in that you cannot change it from CUSTOMIZE > KEYBOARD menu command. But I can't see why it wouldn't work for you. It is not something I've heard before as a problem.

going through macros isn't going to help, as you cannot assign arbitrary keys to macro commands.
on the topic of macros, it is quite complicated to explain in a line or two. You need to read the manual. To save a macro in the CUSTOMIZE list you need to use SAVE button, and supply a name. Then it will be available for future use. If you don't save a name, then you can use it as a scratch macro

try this: use CUSTOMIZE > KEYBOARD menu command, then pick any command and try to set DEL key to it. Does it complain that this key is already used by delete command? (don't answer YES, CANCEL any changes because your keyboard assignment is already complicated

nikos wrote: ↑
2019 Aug 03, 12:27
DEL key is kind of weird in xplorer2 in that you cannot change it from CUSTOMIZE > KEYBOARD menu command. But I can't see why it wouldn't work for you. It is not something I've heard before as a problem.

It beats me too! I've even tried different external keyboards.


nikos wrote: ↑
2019 Aug 03, 12:27
try this: use CUSTOMIZE > KEYBOARD menu command, then pick any command and try to set DEL key to it. Does it complain that this key is already used by delete command?...

No, x2 accepts Delete as a shortcut, no problem. (I just renamed some files by pressing Delete—how many people have done that? LOL)

Anyway, File > Delete (Alt+F, D) does work—so that's a 2-step shortcut, which isn't bad. If you think of anything else I can try or test, let me know. Thanks!

by nikos
so that's your problem, somehow DEL was removed from its legitimate command, and the GUI doesn't allow you to put it back.
one solution is to quit xplorer2 and then remove all custom keyboard bindings, deleting this registry key:
HKEY_CURRENT_USER\Software\ZabaraKatranemia Plc\xplorer2_UC.global\Accelerators

by AndyFielding
Yay, it worked! Thanks, Nikos!

That's okay, I live in a small town—stuff like re-setting custom shortcuts is considered exciting.